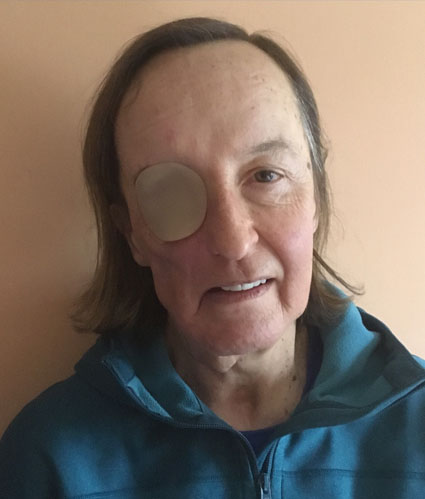 They took a sample and a week later I was given the diagnosis of cancer of the sinus. The dentist / doctor I saw was able to say it was grade 4 cancer but that it had not spread anywhere else. I asked for a survival time - 50% chance of surviving for five years. He also told me that I was young (59) and fit and that would help my chances. He said I would need 'extensive surgery'.

"They took a sample and a week later I was given the diagnosis of cancer of the sinus"
Incidentally, the symptom of a swollen gum is not documented on any website I can find or on the 'Make Sense' website.

At the end of January, I had the big meeting with two family members and a multitude of doctors and dentists. I was told I needed to have my upper jaw removed and my right eye. The jaw would be reconstructed with a bone from my hip. I would need radiotherapy and possibly chemotherapy. I would be off work for six months.

I was introduced to two cancer nurses. I asked if I could speak to someone who'd had a similar operation but no-one could be found. I went to my local Maggie's Centre - who give psychological and medical advice to patients and friends of patients with cancer. I spoke to an advisor about the possible side effects of radiotherapy.

I had the operation at the end of February - it lasted 11 hours. I was fitted with a feeding tube into my stomach. I had a tracheostomy which initially caused me problems in breathing and most of my teeth were extracted.

The first two nights in intensive care in hospital were dreadful. They went on forever and I felt at times that I could not breathe. The nurses had to hoover the tracheostomy to remove any obstructions. I was in hospital for two weeks. During that time I started walking a little with a zimmer frame and was helped by a physiotherapist.

When I got home my husband was there all the time. His employer had given him unlimited time off on full pay. My employer paid at 50% for six months, so money was not a difficulty.

Immediately, I started radiotherapy. I was collected daily by an ambulance and taken to hospital and brought back home (my husband does not drive). During that period, I had no physiotherapy and was left to my own devices. I had no recourse to a dietician. I used a book called 'Anti-Cancer: A New Way for Life'. This became my bible in terms of changes to lifestyle: exercise regime; which foods were strong as anti-cancer agents; no alcohol.

During the radiotherapy I was screwed down to the table with a plastic mask. I found this was okay as I could understand the need for the radiotherapy to be so exact in its target area. On one visit, I mentioned to the cancer nurse that my ankle was swollen. She immediately sent me for an ultrasound scan which revealed that I had a blood clot at the top of one leg. I needed to give myself daily injections for six months.

Psychologically, I was in a state of uncertainty. The risk of recurrence was always at the back of my mind. Any adverse symptoms, even a minor cold, made me think that things had taken a turn for the worse. During the night, I would frequently be awake for a long time and planned my own funeral.

It was of enormous help to have my husband there. I think people who live alone in similar circumstances must have a much harder time. Also lots of friends visited and I gradually started short walks. Not one of them was negative in any way.

After the operation and the treatment, including two overnight chemotherapy sessions, I became aware of some side effects of treatment which I did not anticipate. Deafness in one ear (a gromit was fitted but did not help). The tissue in the eye socket did not heal up. It was explained that this can happen due to the radiotherapy. I was sent for 40 sessions of hyperbaric oxygen therapy to aid the healing but it did not work.

After that operation I was given advice from a speech therapist and help in opening my mouth further.

Several months after the first operation I went for an eye test to assess my field of view. It was not necessary to sit a new driving test. The optician was able to tell me I had passed the test but it took the DVLA three months to process that result. I found this very, very frustrating. I was the only car driver in the family and I also needed the car for my work.

The physical recovery process took 3-6 months. I gradually got back to hill walking. Sexual desire returned after several months. This was a big deal to me as I felt it meant that my energy levels were returning to normal.

After six months, I went back to work on a part-time basis - three days a week. I was not strong enough to do full-time. After two years, I reached retirement age.

Two years after the initial operation my surgeon had a scan done. This showed no recurrence. He said it was very unlikely to recur now. This was a major turning point. I started planning trips abroad. Did a lot of harder hill walks. It was at a time when I was retiring from work so I could pursue other interests. I do a bit of volunteering for Maggie's Centre. I lead a lot of walks for my local Ramblers group. I think I am a bit more empathetic to other people's problems.

As to what could have been done better, diagnosis was poor. I consider my dentist to be a very good dentist but he had never come across this condition. Better training? There could have been more information on the side effects of radiotherapy and chemotherapy which may have allowed me to anticipate a blood clot. There was never a one-to-one meeting with a cancer nurse - although they were always there to contact if a problem arose. I think a dietician could have given advice early on. I think a physiotherapist could have helped the recovery in walking. There was no scheme in place to help someone to return to driving after losing an eye.

I hope this does not sound too negative. I have come through this and am so grateful to my surgeons and all the other members of staff who have helped me along the way.