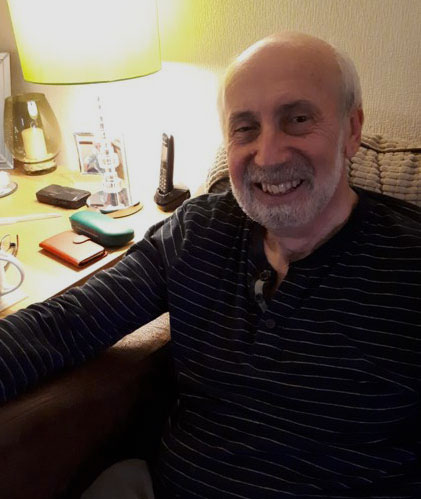 After a number of trips to Birmingham to ensure I was suitable for the operation, I was finally given the go ahead and on Sunday October 16 2011, the operation took place. I walked from the ward to the theatre as I thought this may be the last time I ever walked again. I started the operation but I have no recollection of that day and little of the next day. The operation took around 10 hours. Most of my lower jaw was removed and was replaced by a section of bone taken from my fibula complete with a vein. This bone was broken into three pieces, fixed to a titanium frame and attached to the remaining sections of my upper jaw to became my new lower jaw. The vein was attached to existing veins to provide a blood flow to my new jaw.

When you have a shock like that, every day is a good day and my gratitude to the NHS and the team of dentists, doctors, nurses and surgeons cannot be measured"
I remained in hospital for a couple of weeks until such time as Mr. Parmar considered that the operation was successful and that I could prove that I could walk reasonably, including an ascent of stairs (despite the fact that I live in a bungalow). Thereafter, my wife (who became my driver for many months) and I, returned to Birmingham on an almost weekly basis to ensure that the procedure had settled; and the local District Nurses called in daily to re-dress my leg as healing of the wound took several months.

A year after my first operation I went back for my second, and six steel pillars (dental implants) were inserted and fitted into my new jaw. Six months after the last surgery, a dentist from the Birmingham Dental Hospital built a bridge with a set of teeth to fit onto the pillars. After my surgeries I was determined to get back to my life as much as possible and gradually as my wounds healed and my fitness improved I succeeded. My speech is now almost perfect, I can eat almost anything and my self-confidence has returned. I do not need to work, but I can do whatever I want. I live a very active life including playing golf, watching football, umpiring cricket and skiing (to prove that loss of bone can be overcome) just to name a few. I also spend as much time as I can with my family. I returned to my role as Chairman of my local Parish Council, give occasional speeches and we go on holiday several times a year, so life is good!

When you have a shock like that, every day is a good day and my gratitude to the NHS and the team of dentists, doctors, nurses and surgeons cannot be measured.

If you're interested to learn more about Chris' experience, you can read his blog, which he completed during his recovery and rehabilitation.