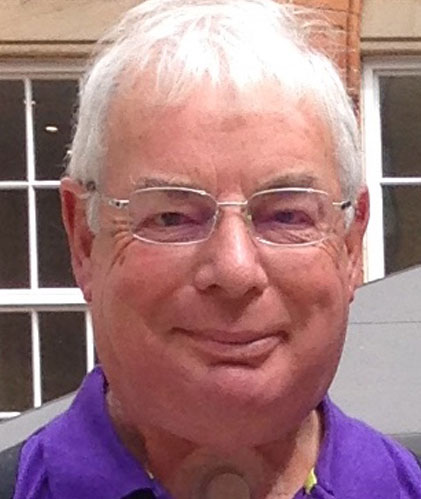 In August 2009, my wife and I went on our first ever cruise to the Baltics to celebrate our ruby wedding anniversary. The cruise itself was a lovely experience, despite the weather and we visited some beautiful countries and ate delicious local food. However, during the on-board evening entertainments, I noticed I had difficulty singing, but didn't say anything about it. As a retired music teacher with a lot of singing experience, I should perhaps have realised that something was wrong, but the problem tended to come and go. In my mind, I felt it was a case of persistent laryngitis, but in January of the following year - some five months later - I went to see my GP.

I was immediately referred to my local hospital for the issue to be investigated. The consultant to whom I had been referred to examined me under anaesthetic and found a polyp. The histology revealed malignant changes. Two laser treatments it was hoped would eliminate the malignant cells. This was not the case. The pain persisted and I discussed this with a very helpful and supportive speech therapist who was working with me. As a result of her discussions with the consultant, I was referred to the regional centre for radiotherapy. By this stage the Head and Neck Consultant told my wife and I that it was laryngeal cancer â but did not expand on that. The Oncology Consultant was quite adamant that 35 sessions of radiotherapy were necessary. That course ended just before Christmas 2010 and proved to be unsuccessful; the pain not only persisted but intensified considerably. At this point the Head and Neck Consultant, to whom I had initially been referred to, decided to refer me to Mr Pracy at the Queen Elizabeth Hospital, Birmingham (QEHB). My reaction to radiotherapy was not good â the skin on my chest was very burned and my speech therapist explained that my throat would be even worse. Had my wife not been able to dress the affected area I believe that I would have been admitted to the hospital.

Eventually I went home and was taken care of by my wife; she is a trained nurse, and a QEHB nurse trained her to attend to my dressing. However, by the following February I had not fully recovered, and I was re-admitted to the hospital for a Peck's Flap procedure - I was in QEHB for a further four weeks. I had a number of infections while in the hospital â mainly fistulas, for which I was given very powerful antibiotics. I also revisited the theatre so the areas of infection could be flushed out. It was not a good time; healing was so slow that I wondered at times if it would be successful. It was the care and support of family, friends and hospital staff that kept me going. Fortunately by April 2012, healing had taken place and after nine months of using a tube feeding, I was able to eat again. Additionally and importantly, for all this length of time I had been unable to speak, so all my communication needed to be written. I could listen to conversations, but not join in, I could go to friends who very kindly invited my wife for a meal, but I could not eat. I think it is important to remember that such times may be difficult for the patient, but they are also very difficult for carers. Following a successful swallow test in April 2012, I was able to eat again and also able to talk again using a prosthetic valve, which for me has worked very well.

"It's possible that if I'd acted quicker, some of what I went through may have been prevented ... if I can now help raise awareness of Head & Neck Cancer and improve levels and knowledge of treatment across the UK, that can only be a good thing"
The level of care and support I have received from the staff at the QEHB â from consultants, nurses and speech therapists was absolutely amazing. I am grateful to say their support continues to this day, though now I only need to see my consultant once a year, and speech therapists twice a year. My wife and I are now able to lead more or less normal lives. We are involved in charity work, I play golf and we visit family who live away, we have had holidays in the UK and abroad and I can happily say that life is good.

I am becoming more involved in the Make Sense campaign, which is an initiative run by the European Head and Neck Society that aims to raise awareness of Head and Neck Cancer and encourage earlier diagnosis. Itâs possible that if I'd acted quicker, some of what I went through may have been prevented, but who knows? If I can now help raise awareness of Head & Neck Cancer and improve levels and knowledge of treatment across the UK, that can only be a good thing.

I hope we all appreciate that life does not stand still. Now 10 years on from my initial treatment it is useful to reassess my situation.

As far as my laryngectomy, little has changed. Apart from needing to follow a regular daily procedure for caring for the stoma and speaking valve, things remain good.

As far as after-effects of radiotherapy are concerned, things are not so good. Radiotherapy for a lot of people can be a very effective treatment but that has unfortuately not been the case for me. Some eight months or more ago I realised that at times raising a mug to my mouth in order to drink was for some reason difficult. My arm did not want to move the way I was telling it to - fine motor control was at times elusive. I could detect that this experience was increasing to the extent that I was having difficulty using my hand to enable a finger to close the filter on my stoma â and therefore it was becoming difficult to talk. I was also beginning to experience difficulty at times in placing my stoma's baseplate accurately - I just could not get my arms to move to the right place and to allow the coordination necessary to fix the baseplate. I was also finding that I could carry things but could not lift them. My right arm in particular would just give way. My wife and I went to Lanzarote for some winter sun and I was unable to lift a small suitcase into the overhead locker on the plane.

The GP I saw was very understanding and advised me to see an orthopaedic consultant. That referral was interrupted because in the area where I live, all orthopaedic referral are subject to a triage system whereby you have to be seen by a physiotherapist, presumably to ensure that a GP has made the correct diagnosis. A considerable wait for an appointment to see a physiotherapist led us to opt to see a consultant privately â and he was far from happy, saying that because this was a post-cancer situation, the referral should have been direct because, although he thought my problem was not a malignant tumour, he could not rule it out. The consultant, following an MRI, diagnosed the problem as post-radiotherapy nerve damage. There is no cure for this. I have been fortunate in finding locally a personal trainer at a gym who specialised post - graduation in rehabilitation â and she has been very good and very supportive in researching my problem, finding routines that should help to stabilise my condition â and encourage me to try and keep to that routine. I have experienced a kind of pins and needles sensation in my arms for about three or four years now â also a result of radiotherapy â and that is something I have learned to live with. My arms weakness has been more difficult and has at times been a bit depressing because of the impact it has had on so many aspects of my life.

I have added this update because I hope it will be useful to others for me to try and be totally realistic. My ENT consultant explained that it is encouraging that so many more people are living longer after radiotherapy â but what is becoming apparent is that radiotherapy may bring problems quite some time after the date of treatment and there is no telling what the problems might be. There are no 100% guarantees in this game and it is important to recognise that.