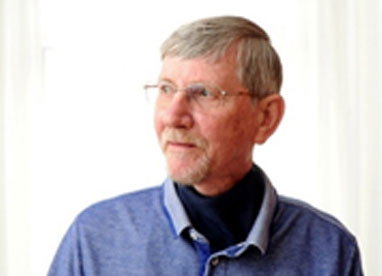 Following the operation, I endured 37 consecutive days of radiotherapy with weekly sessions of chemotherapy. Towards the end of the sessions, I began to feel nauseous, my neck was quite burnt and I was badly dehydrated, which resulted in me being re-admitted to hospital.

A few months after the radiotherapy and chemotherapy, I began to suffer recurring problems with the speech valve in my throat. This had to be changed regularly as it would leak causing choking whilst eating or drinking. It transpired that the effects of radiotherapy had badly scarred the tissue inside my throat. I was in and out of hospital for the next five years until 2014, when it became impossible for me to eat or drink through my mouth, or even talk for eight months.

"It transpired that the effects of radiotherapy had badly scarred the tissue inside my throat"
Towards the end of 2014, my consultant referred me to a consultant surgeon at Sunderland Royal Hospital in the North-East of England. I was admitted and operated on to create a Major Pectoral Muscle Flap. This involved taking muscle tissue from the left side of my chest and grafting it to my neck. I had 80 metal clips (staples) in my chest, which have subsequently been removed but I no longer have a left pectoral muscle. I recovered reasonably quickly and was able to eat, drink small amounts and talk again.

In early 2016, I found that, once again, I was completely unable to speak. My speech valve required re-aligning as it had migrated to such an extent that it was no longer correctly positioned. I was given a difficult choice which was that I could either eat and drink or talk for the rest of my life as there was a strong likelihood that I wouldnât be able to do both.

In March 2016, my speech valve was removed, and the fissure allowed to close completely. Eight months later, in November 2016, I was informed that a new speech valve would be fitted "before Christmas". However, it was not until May 2017 that I was admitted for surgery and discharged the same day. The speech and language therapist fitted a new speech valve later that week, which enabled me to eat, drink and utter a few words. Even after so many years since the laryngectomy, the hair under my arms and on my chest has not grown back and my neck always feels as though it is burning in hot sun - an after effect of the radiotherapy. I have to wear a laryngectomy tube and cuff rather than a baseplate as my stoma is causing some difficulties. I still find talking difficult and speak slowly and deliberately; but eating and drinking is progressing well.

Without my GP's prompt referral, I would not be here today. The surgeons, clinicians, therapists and hospital workers who have looked after me over the past few years deserve my eternal gratitude as do the nurses and staff of Lynher Ward, Derriford Hospital, Plymouth.